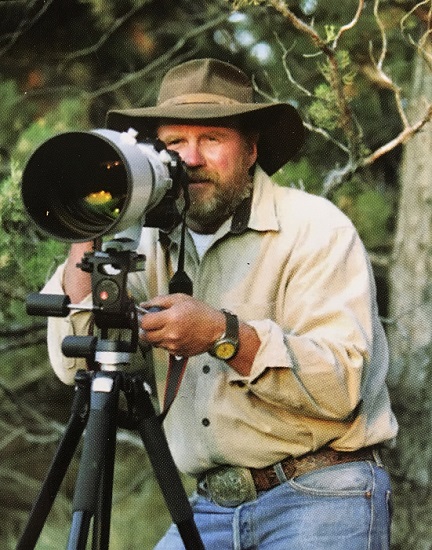 Oregon native of almost 60 years, Tyler Saunders lives in Central Oregon with his high school sweetheart and wife, an avid quilter. His family settled in Bend in the late 1800's. His grandfather was a contractor in Bend. The family owned a brick yard which produced most of the material of which many of the older brick buildings of Bend were made. Tyler began drawing and painting at the age of 12.

Saunders divides his time between working as a superintendent for a large construction company in Bend, Oregon, and as a master painter. He has photographed wildlife mainly in the Western U.S. and Africa for his painting references. Kruger National Park in South Africa and parts of Namibia are favorite locations for filming. His painting style is photo realism with the background fading very quickly but still representing the habitat area of the animal. Tyler is very passionate about capturing wildlife with incredible realism using rich colors in oil on his board mounted and stretched linen canvases.

Saunders has organized and directed many children's outdoor programs and has dedicated over 11 years to the kids of H.O.A.L. that are suffering from life-threatening illnesses. He is now spearheading and directing the new program known as Children of Circumstance Outdoors (C.O.C.O.) in Oregon which has a similar mission as H.O.A.L. and wishes to expand the same opportunities to kids who are terminally ill or face life without a father or mentor in other states.