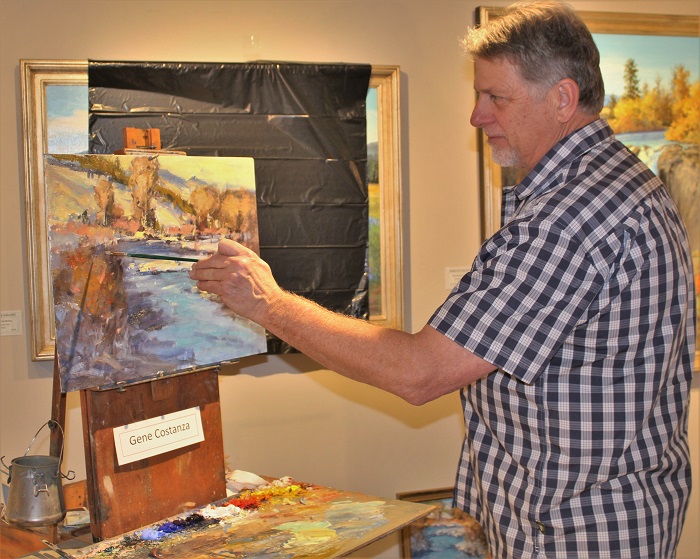 Costanza is a contemporary realist oil painter who prefers the impressionistic application of oils. He focuses his efforts primarily on landscape and mankind's interaction with nature. Hi is equally at home painting 'en plein air' as well as in the studio.

Gene all but abandoned art in his early 20's when he took up law enforcement, and after 25 years he re-entered the art world. He believes police work provided him with the discipline to overcome his personal tendencies and employ the discipline required to create a good painting that endures over time.

Costanza learned much from studying the masters and credits the majority of his professional and artistic growth to friend and tutor, Scott Christianson. Other influential workshops included: Tom Browning, Kevin McPhearson, Matt Smith, Rusty Stecher, and Jill Carver.

His work is collected from Coast to Coast, and also in South Africa. He is included in the permanent collection of the Academy Museum in Easton, Maryland. Gene highly regards two 'Artist Choice' awards, one from the American Impressionist Society 2011 National Show, and the other from The Forgotten Coast first annual 'Founders Award' in 2007.

Costanza is a Signature Member of the American Impressionist Society and the Oil Painters of America. He is also a juried Out of State Member of the California Art Club. He has exhibited in their regional and national shows as well as The Salon at Legacy Gallery, The mountain Oyster Club and others. His juried plein air shows include: Plein Air Easton, Sonoma Plein Air, Sedona Plein Air, The Forgotten Coast Invitational, and the Telluride Plein Air.