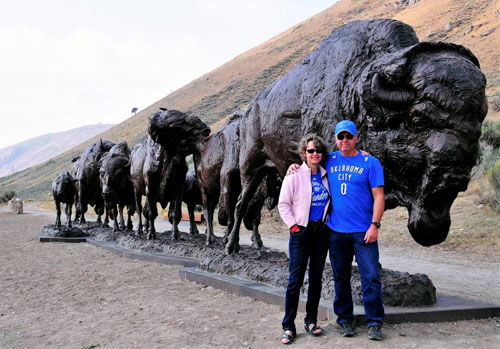 Richard Loffler grew up on the wide-open Saskatchewan prairies in central Canada. He became a committed outdoorsman as a teenager absorbing the wonders of the natural world around him.

Two local zoos at Saskatoon and Moose Jaw and another larger zoo in Calgary, Alberta became a retreat for observing animals in close quarters, while the Royal Saskatchewan Museum in Regina, where he began working in 1978, was a haven to study the beautifully prepared natural history dioramas.  Loffler is a dedicated family man and an avid outdoorsman.  He juggles his time between his fieldwork, his studio work and the Montana foundries where he chases some of the castings and oversees the patinas and completed works.

Loffler was accepted into membership with the Society of Animal Artists and the National Sculpture Society, both in New York, in 1989. He continues to show with the Prix de West Invitational Exhibition in Oklahoma City, Oklahoma, where he was chosen for the Robert Lougheed award in 2002 and the James Earle Fraser Sculpture Award in 2012.

Loffler has monument size installations in several museums in Canada and the U.S.
His monument of “Buffalo Trail” can be viewed at the National Museum of Wildlife Art in Jackson, WY.

Loffler’s most recent magazine article was in ART of the WEST, Nov 2016

Represented by Galleries In: